.Cola Keeps It Positive On Mixtape, ‘No Such Thing’

“It’s 2015. We gotta stay away from the negative shit,” the San Jose-based emcee and producer Cola says on a recent evening, as he plays with the bottle cap of the soda he is drinking.

The emerging rapper is referring to the recent Chris Brown shooting at local South Side club Fiesta, but he could just as easily be discussing his own philosophy as an artist. He says he’s dealt with too much negativity in his past; now his focus is solely on empowerment, positivity and self-love.

Just listen to “Reflections,” a highlight from the mixtape he dropped in October, No Such Thing. The release has been his most successful to date, earning nods from local heavyweights and placements on both Snoop Dogg’s GGN web show and the Dogfather’s chart Underground Heat. He plans to release two new music videos in the coming months.

A San Jose native, Cola grew up as Anthony Mastrocola on the city’s west side and attended Archbishop Mitty High School on a baseball scholarship. While he moved around a lot growing up—he jokes he’s become real efficient with packing—he never changed schools. He says he would often challenge his teachers and goof off in class, but managed to dodge any serious consequences thanks to his general likeability.

His stage name doesn’t come from an unhealthy love for carbonated drinks. It’s actually a contraction of his last name and was first used by his high school football coach. Since then, he says, “I’m literally Cola to everybody.”

50 Cent, Eminem and the Neptunes were the first names in his CD collection, but when his cousin introduced him to rock in middle school, his focus shifted to Nirvana, Sublime and Slayer. Kurt Cobain and Jimi Hendrix remain lasting influences. Nirvana’s iconic smiley face is tattooed on his forearm.

His rock influence is still present in his work. The music video for “Mosh Pit” follows Cola as he is kidnapped by bikini-clad, masked women. The raucous song carries forth atop a high-energy beat, which samples Green Day’s infamous guitar riff from “Brain Stew.” Such nostalgic flips are a through-line on No Such Thing, which also features samples from Dirty Vegas’ hit “Days Go By,” Weezer’s “Say It Ain’t So” and Sister Nancy’s dancehall classic “Bam Bam.”

After his deep excursion into rock, Cola veered back to hip-hop his freshman year in high school when he was introduced to Hieroglyphics and Living Legends. As much as he enjoyed 50 Cent, he gravitated to these underground legends because he found them more relatable. The Bay Area’s hyphy movement, best known for its late poster boy Mac Dre, also had a large impact.

While his musical focus was initially on rapping and recording as much as possible, Cola admits that his approach is now more refined. “I’m trying to perfect my songwriting,” he says, and nowhere is he more proud of his renewed process than on album cut “Tomorrow,” featuring Rey Resurreccion.

In his first verse, he weighs the pros and cons of settling down, compared with following a hard life to an untimely demise like a number of notable rock stars. After Rey’s verse, Cola’s visions of future success collide with his current stagnation and frustration, leading him to struggle with the notion that “supposedly I’m where I’m supposed to be.” 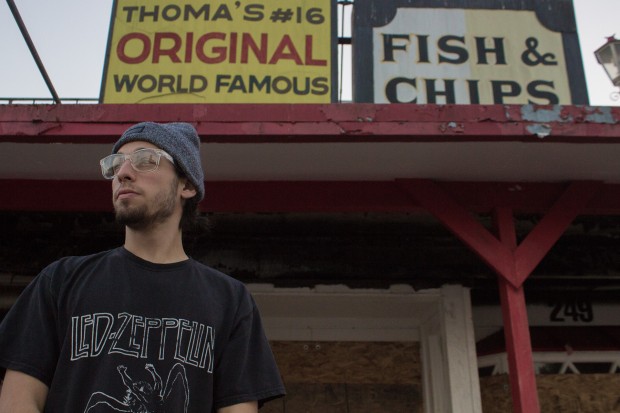 “It was my breakthrough as far as writing a conceptual song with a bridge and variations. My first verse was the realest, most natural one I’ve ever written,” he adds.

Local heavy hitter Dirtbag Dan recently stepped in as a mentor after hearing No Such Thing while on tour. Such support can still feel a bit surreal for the 24-year-old. He now has his own studio but had to move clothes out of his friend’s closet to record his verses in the not-so-distant past.

“It’s amazing because a year ago, we were standing around in parking lots outside of [Silicon Valley] De-Bug because we had nowhere to go. We couldn’t go to anyone’s house because everyone’s situation was fucked up. There was a lot of waiting around,” he says.

The positivity in his recent output stems from contemporaries like Bay Area hip-hop collective HBK Gang (home to Iamsu! and Sage the Gemini). He’s also indebted to Lil B the Based God, whose positive “based” philosophy has found mainstream recognition, most notably in Kendrick Lamar’s Grammy-nominated hit “i.”

Cola’s rampant optimism is a recent transition for someone who admits he once suffered from depression and self-consciousness. At its worst, those feelings led to thoughts and attempts of suicide.

Back then, he recalls earnestly wishing he could’ve been born as one of his better-liked classmates. These days, however, he is clearly much more comfortable in his own skin. It’s a feeling he wants to help others discover.

Next ArticleRight to Offend: Satire and Free Speech without Censorship